The wartime log books of the Australian airmen prisoners of Stalag Luft III have many commonalities. The same images, poems and quotes appear time and again. 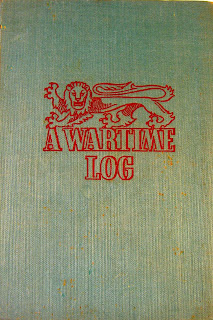 One illustration that had wide appeal was Donald Duck behind bars. But this wasn’t just dipping their hats to a favoured cartoon character, Donald Duck—or Downed Donald as I prefer to call him in this context—represented the fallen airmen themselves. Jim McCleery’s angry duck who, like McCleery flew in Lancasters, declared, ‘I Wanted Wings!’ 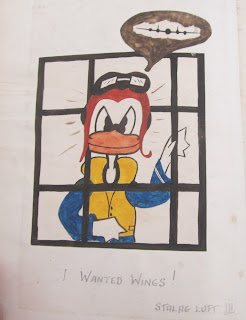 (AWM PR88/160, McCleery, wartime log book)
Peter Kingsford-Smith’s frustrated duck-pilot was sobbing as he exclaimed in animated disbelief, ‘“Join the air force and see the world”, they said!’ and recorded, too, that ‘I wanted wings’. 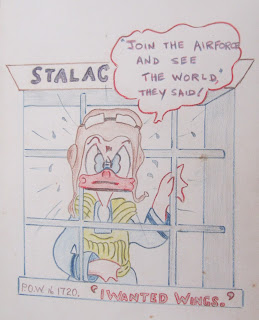 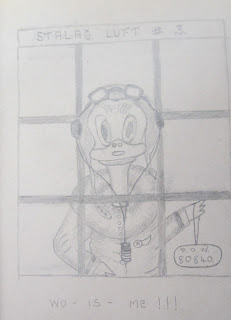 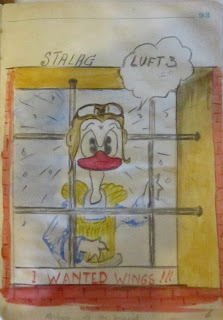 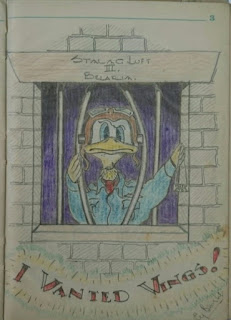 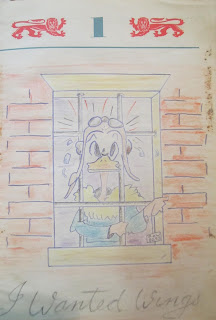 (Johnston, wartime log book, courtesy of the late Evelyn Johnston and Colin Johnston)
Lest anyone not be convinced that Downed Donald represented specific individuals, careful observers will see that the he often wore the appropriate aircrew badge, and had been given the same POW number as the airman prisoner. In an imaged that resembled the depictions of Downed Donald, Johnny Dack ditched the duck and put himself behind prison bars. 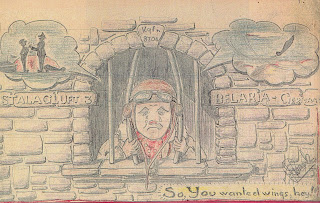 (Dack, So you Wanted Wings, Hey!, An Autobiography. Part One. Moorabbin: the author, 1993, p. i)
These Australian examples are by no means the only ones. Downed Donald appeared in many logbooks, representing airmen of many nationalities. New Zealander Jack Rae also uttered the ironic kriegie lament. (The airmen prisoners called themselves kriegies, a contraction of the German Kriegsgefangener—war prisoner.) 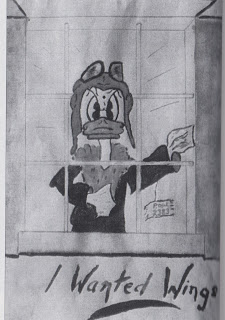 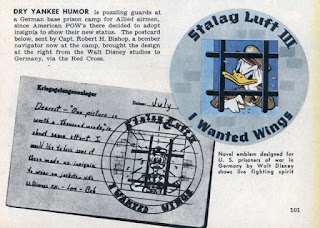 (http://blog.modernmechanix.com/wwii-pows-get-a-disney-designed-logo)
As prisoners moved beyond Stalag Luft III, so too did Downed Donald, and his image appears in the wartime log books of airmen in other POW camps throughout Germany. Downed Donald also gained a life behind the prison camp. He featured on the nose of one of the US 56th Fighter Group’s P-47 Thunderbolts. 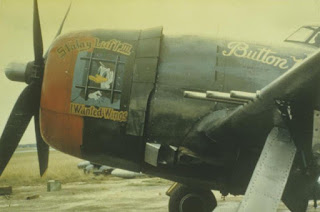 (http://www.americanairmuseum.com/aircraft/18486)
At first glance a duck behind bars appears a surprising motif for air force men. Perhaps surprisingly, the cartoon duck had a strong air force connection. Walt Disney launched Donald Duck in 1934, and, along with Mickey Mouse and Goofy (a dimwit dog), found himself in a series of ludicrous adventures in both film and comic strip. 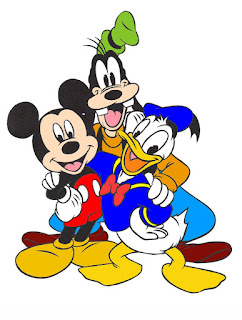 (https://www.sunsetcast.com/poster/10000004.jpg)
Donald had a temper that countered a positive outlook on life. He was also a noted prankster, with little malice in him, and a show off. A scan of Trove newspapers indicates that he was a well-loved drawcard at Australian picture palaces from his debut in the mid-1930s.
After the United States entered the war, Donald became a mascot for a number of US Army Air Force units. His face even appeared on the ‘Ruptured Duck’, one of the aircraft that participated in the 18 April 1942 Doolittle Raid to bomb Tokyo and other places on Japan’s Honshu Island. 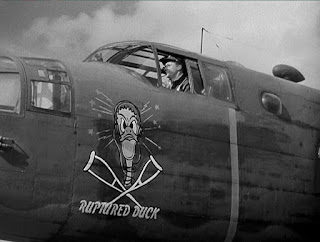 (http://ww2in172.com/wp-content/uploads/2016/04/30-Seconds-31-49-Ruptured-Duck.jpg)
In May 1942, Donald was ‘drafted’ into the American army and appeared in a number of short propaganda films including November 1942’s Sky Trooper where he desperately wanted to fly. After a series of misadventures, he had his chance, as part of a parachute troop. Things did not go quite as planned and he managed to fall out of an aeroplane during a fight. The renowned comedic icon with military connections was now a downed airman, just like many of his enthusiasts in Stalag Luft III. 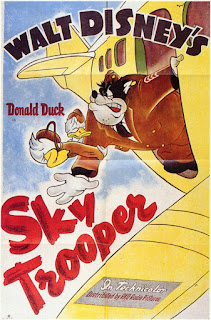 (http://vignette3.wikia.nocookie.net/disney/images/3/38/Sky-trooper-movie-poster-1942-1020197870.jpg/revision/latest?cb=20120704012230)
Downed Donald, confined behind bars, angrily bemoaning the ironic outcome of his great desire for wings, was the creation of Emmet Cook, an American prisoner of war captured in March 1943. Cook mixed freely with the British, Canadians, and Australians in Stalag Luft III’s North Compound (Americans would not be segregated into their own compounds for some months). As well as working for the escape committee, he filled in his time playing sport, painting, and drawing cartoons. Perhaps the first appearance of the Duck motif was on Cook’s June 1943 postcard informing his mother that he was a prisoner. 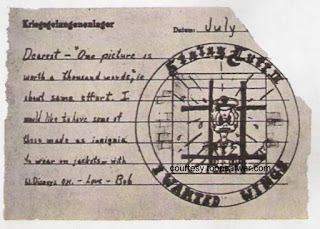 (http://www.usmilitariaforum.com/forums/index.php?/topic/6728-stalag-luft-iii-i-wanted-wings/)
Other prisoners liked his creation and wanted their own copies. Cook obliged and, adopting the nom de guerre, ‘Mutt’, reworked the comic image into a number of other men’s wartime logs. Others created their own versions and, at some point, Robert Bishop, another American, reproduced it on a postcard that he sent to his girlfriend. She forwarded it to Walt Disney who had an artist clean up the design. 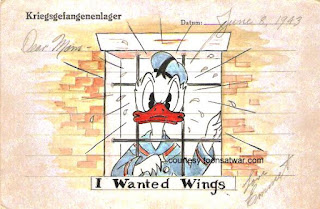 (http://www.usmilitariaforum.com/forums/index.php?/topic/6728-stalag-luft-iii-i-wanted-wings/)
The Walt Disney Company now holds the copyright but Downed Donald—the kriegie duck—first experienced life behind bars and barbed wire 74 years ago. For many downed airmen he summed up the frustrations of captivity.
Posted by Kristen Alexander at 18:45